With a strict brief from her daughter of ‘bats and owls, pink colours BUT it has to be dark, stars, midnight feasts, pillow fights, and sparkles’, Emily bought her six-year-old’s dreams to life with this night-time themed birthday party.

Read on to find out just how she managed to pull it off.

Taking inspiration from the quote ‘stay wild moon child’, black undertones with highlights of pastel elements fused throughout allowed Emily to style a girly event with a little bit of edge.

Pastel pinks, purples, and blues were spread across the space with streamers, confetti, balloons and flowers, while pops of metallic silvers and gold captured the stars and moons.

Emily says ‘these colours were picked to keep a light girly version of a night-time party. I didn’t want to be too sophisticated by going down midnight blues and navy.’

Holographic was also a must, with the cake adorned with a super cute hand-crafted moon topper!

Emily used lots of handmade elements, such as cutouts of animals and star,
as well as posters, placemats, and food prep.

Emily guarantees that ‘there’s no need to spend hundreds to give your party the wow factor,’ …and we totally agree!

Little partygoers were treated to a mini buffet, as well as an abundant grazing table.

Emily tells us, ‘I wanted a kids’ version, without it being metres of lollies and cake.’

Not only can you make a delicious and personalised food selection, but also incorporate it into the event styling.

‘I tried to keep the food tones to match the party colours. The great thing about a grazing table is that it’s pretty much all supermarket food, but it looks so great together.’

Scroll on to see the celestial-festivities unfold. 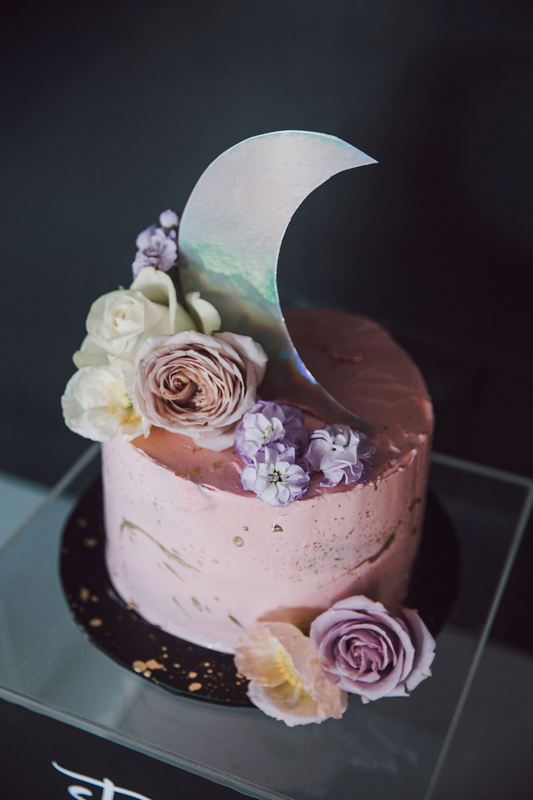 Head to the HOORAY! Vendor Guide to see our favourite party suppliers. Every night before bed, April (owner of Amuse Events & Rentals) and her son Dex, talk about... A baby’s first birthday is always a big milestone, and what more cause could you need for a...