Ebony and Dan met in their thirties through mutual friends. The two had already established independent lives, so both knew exactly what they were looking for in a partner. That made the relationship come naturally—and the couple fell hard for each other within only a few months.

The two say choosing each other has always felt like the best decision either of them have ever made.

Dan planned to propose on a weekend away for their two-year anniversary. Eb is a bit of a detective, so Dan had to keep his proposal plans well under wraps. Planning it on their anniversary was crucial to keep it a surprise for Eb, who would’ve been onto his plans straight away if he’d planned a random weekend getaway!

They drove to North East Victoria to the top of Mount Buffalo, and Dan popped the question surrounded by snow and mountain ranges. Eb, of course, said yes!

The loved-up duo wanted to have a party surrounded by those they love in order to celebrate. Steering clear of traditional wedding plans, they kept it local, throwing the celebration in the inner north of Melbourne just around the corner from where they lived. They said the Craft & Co. warehouse in Collingwood was perfect and meant all their friends and family were just a short stroll or quick tram ride away.

They wanted to throw the ultimate gathering to tie the knot and be surrounded by the people they love most in the world.

When it came to decorating their do, Ebony says she wanted ‘flowers, flowers and more flowers!’

All the arrangements were crafted by Thrive Florals, who did not disappoint. Each of the blooms used in the bouquets and venue decorations all held special meaning to the couple.
The dahlias were Ebony’s favourite flower growing up, her Pa grew award-winning orchids, sea holly represented her Scottish ancestry and the blue gum foliage was for the bushland near where she grew up. Lastly, the couple sourced hydrangeas that were weaved through the arch where they exchanged vows.

Another special touch came in the form of dried rose petals. Ebony’s Aunty has a huge rose garden and provided the petals to throw over the couple after the ceremony. How special is that?

Eb was never going to wear white on the day and Dan didn’t want a classic suit either. So, the two opted for colour.

She wore a stunning gold Alice McCall dress for the ceremony, then switched it up for the reception, wearing a fun handmade sequin jumpsuit by Carletta the Great Weirdo. Dan wore a mismatched three-piece suit; the standout of the set being a sage green vest and jacket.

The bridal party chose their own outfits, and the selection of colour tied in the palette perfectly.

Take a look at the striking occasion captured by Melbourne-based photography duo, It’s Beautiful Here, below! Take a peek at our top picks in our HOORAY! Vendor Guide. 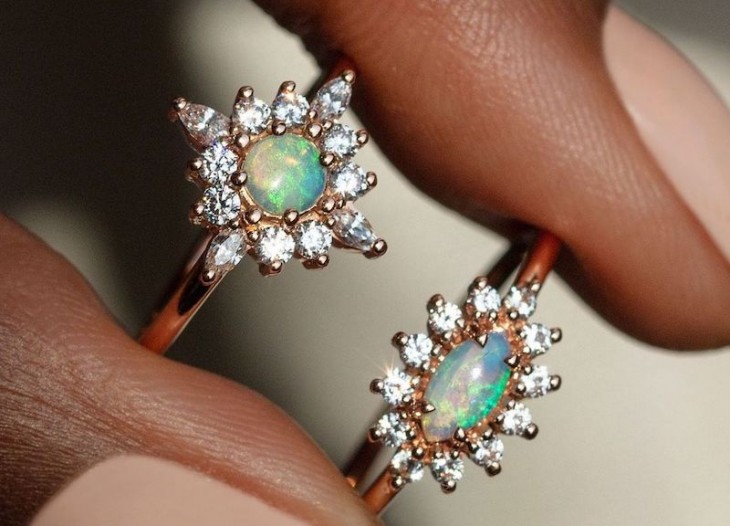 An engagement ring is the first step on your journey down the aisle, so it’s important to find... Choosing what to wear on your big day is a big decision. From the perfect dress, to shoes that... 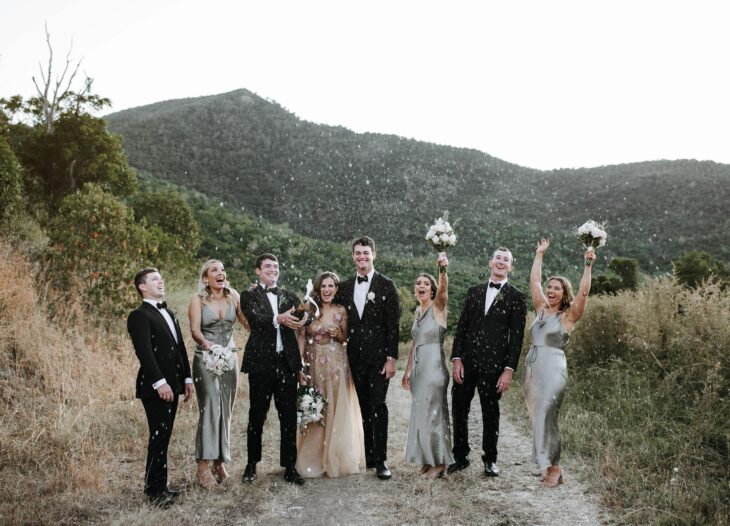 The Love Story After growing up in Walgett, Western NSW, Ruby relocated to Rockhampton to study...